Posted by amber in Gatlinburg Haunts 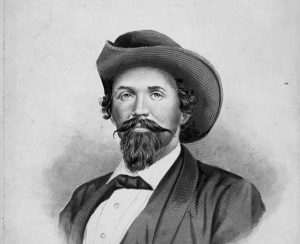 The building that is now recognized as The General Morgan Inn was known as the DeWoody Tavern, a janky wooden structure built in the early 1790s by a man named William Dunwoody. The establishment was well-known for being a friendly space, offering food, supplies, and lodging to pioneers who were traveling westward from the massive mountain ranges of the east. These weary travelers were traveling the Great Wagon Trail, a road that would eventually become U.S. Highway 321. The Inn is located in Greeneville, Tennessee, and is about an hour and a half outside of Gatlinburg.

With its abundance of fresh mountain water, Greeneville’s Big Spring made the location a popular stopping point along the trail. Over the years, the DeWoody Tavern’s owners and operators changed along with its name. From the 1820s to the 1860s, the tavern would be named Bell Tavern, as well as Lane House, when Joshua Lane owned the tavern during the Civil War. As the Lane House, the tavern hosted both sides of the war, serving Union and Confederate soldiers alike. As one can assume, this led to one of Greeneville’s most infamous skirmishes.

The Thunderbolt of Confederacy

On the morning of September 4th, 1864, guests of the Lane House witnessed a fight to remember. The story starts the day before when Confederate General John Hunt Morgan arrived in Greeneville late in the afternoon, arranging to stay in the home of his friend Mrs. Catherine Williams. According to the tale, Union troops were given a tip about Morgan’s location, eager to capture the man dubbed ‘The Thunderbolt of Confederacy.’

Troops moved into the town at dawn. Even though the Williams mansion was smack dab in the center of town, the yard was surrounded by large trees, gardens, and a vineyard. Once word got out, and John Hunt Morgan knew he had a target on his back, he enlisted the help of Catherine and her family and attempted to escape. He was outnumbered, ambushed, and shot dead as he ran from the yard to the horse stables. General Morgan was buried in Lexington Cemetery shortly after, his reign of terror on the Union over.

In 1886, the East Tennessee and Virginia Railroad built a new train depot in Greeneville, bringing intense change to the entire community and surrounding areas. Colonel John Doughty, a local entrepreneur, was ready to start a new project and recognized the need for a hotel to accommodate the business travelers that had been flowing into the city. Doughty purchased and demolished the Lane House and began construction of a brand new brick structure which he named the Grand Central Hotel. Grand it was, with its four stories and marble trim throughout. The structure was one of the finest and most luxurious hotels between Roanoke, Virginia, and Chattanooga, Tennessee. It was elegant, furnished with wide hallways and luxurious furniture; it even had an upper balcony that extended across the front of the second story, with a flight of stairs that opened up right on Main Street. The street level of the Grand Central was filled with lush retail stores, creating an oasis in the middle of Greeneville for people in business, entrepreneurial spirits, and dreamers.

The hotel switched hands once, and it remained within the Brumley family until 1981 when the Main Street group program was in development. The group created a new board under the name of Olde Town Development Corporation and set about acquiring historic locations around the hotel. Eventually, after nine years of planning, fund-raising, and construction, the project’s centerpiece was complete—the General Morgan Inn and Conference Center, opening its doors on September 18th, 1996. The Inn is now part of the National Trust Historic Hotels of America and the National Trust For Historic Preservation.

Ghosts of the Glamourous Inn

A beautiful story of history preserved but progressed, wouldn’t you say? So why are we sharing this article? Well, legend has it that the inn is haunted by not one, not two, but forty ghosts. You read that right; forty spirits are known the walk the halls of the General Morgan Inn.

Stepping into the lobby at the General Morgan Inn is like being swept a hundred years into the past. The ornate décor still stands today, the attention to detail a testament to the architectural talents of designers of the days gone by.

Staff at the hotel have named a few of the spirits here, Green Room Grace, Front Desk Bill, and even General Morgan himself. One staff member mentions that the ghosts are just like any other guest and have had a fair share of paranormal encounters while on the job. Most often, Grace, a former server, is seen every day by staff of the restaurant. The spirit is notorious for stealing silverware – spoons, to be specific. The strangest part, she only takes spoons from her preferred setting, the Green Room – hence the name Green Room Grace. The hotel even has to order spoons more often than other silverware because once Grace takes them, they never turn up again. Grace is also known for messing with the paintings on the walls at night, making sure they’re crooked by morning.

Even more chilling, Grace made it known to some guests that she has been haunting the hotel for over seventy-five years with nine other ghosts surrounding her. One of Grace’s spectral friends was spotted by staff, an experience they’ll never forget. While prepping food, a few staff members caught a shadow out of the corner of their eyes. They all turned simultaneously, seeing just a black outline of a person move across the kitchen. The kitchen is active as well, with heavy objects moving and even flying across the room by themselves. Large metal serving trays fly off of the ovens, and apparitions are seen moving about almost daily.

Sitting right next to the General Morgan Inn, the former Depot Street Hotel. It’s been sitting abandoned for decades, but the front desk is still in operation by a former employee of the hotel, a spirit by the name of Bill. According to investigators of the Depot Street Hotel, Bill is accompanied by twenty-six other spirits and is happy to be haunting the desk.

Back on the inn’s second floor, the ‘Jesse James’ of the Civil War, John Hunt Morgan haunts with a vengeance. Known for his vanity, he refused to be photographed without his general’s hat. Due to his unearthly narcissism, Morgan haunts the finest suite of the inn, the Presidential Suite, where his photo hangs on the wall. Guests have reported screaming coming from the room, even calling the front desk to report incidents. The staff has learned to tell them they’ll handle it, but they know that the room is empty. In attempts to communicate with the spirit of room 207, the ghost stated that it was shot in the back and had died on the premises – sounds an awful lot like the General.

The spirits of the General Morgan Inn truly make their life at the hotel enjoyable. Some are seen playing on the elevators and even sitting in the inn’s restaurant having coffee and reading the newspaper. The staff has gotten so used to the spirits at the inn that they say they barely notice when something paranormal happens. It’s not until guests point it out that they realize, yes, apparitions and disappearing silverware isn’t considered normal! Believe in spirits or not, Greeneville is such a historic town that the legends told here are a great way to keep that history alive and well.