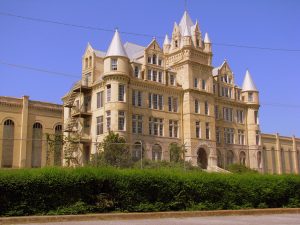 We all know of those places that are meant to be evil, destined to become a breeding ground for negativity and tragedy. Prisons seem always to make the top of the list. Housing some of the nation’s most dangerous inmates, large prison systems keep hold of the souls deemed too vicious and savage for normal society.

The anger, hatred, and depression that these buildings have witnessed is unprecedented. Similar to trapped zoo animals, long-time prisoners become disoriented, almost separate from their humanity. The stress and danger of everyday living in these facilities is not only inhumane but highly damaging to the psyche and the energies surrounding these structures. Tennessee State Prison is one of these places.

A Bit of Background

Rich with history, the prison’s unique Victorian architecture stands forebodingly over anyone who steps in front of its doors. This prison concept was one of reflection, solitude, and hard labor – with only the latter actually occurring. Tennessee State Prison opened in 1898 and has been closed since 1992 due to overcrowding issues. The original prison building started operations in 1831 but was soon expanded. It was modeled after the ‘Auburn Penitentiary’ in both design and discipline. Inmates were subject to unique treatment championed by the Auburn model, which stated ‘during the day the prisoners, with downcast eyes, labored silently together in workshops. At night, they slept alone in separate cells. Under no circumstances could they communicate with one another, and only when necessity demanded could they receive letters or calls from relatives and friends.’ The Auburn model was one of the cruelest systems out there, with deputies forcing prisoners to be completely silent in order to strip away their sense of self. When the sense of self was taken away, convicts were more likely to obey orders. Whips and flogging were also common in Auburn model facilities, and prisoners were known to succumb to injuries and blood loss from the lashings. Once whips were abolished, guards found new ways to punish inmates. The ‘shower bath’ was one of them and consisted of a large barrel with a discharge tube at the bottom. The prisoner would be stripped naked, bound hand-and-foot with a wooden collar around the neck to prevent head movements. The barrel with the inmate inside was placed directly under a pipe, where water, sometimes freezing, would pour out and into the tube, filling the barrel with water, simulating drowning.

The prison housed both men and women, once separate, but overcrowding led them to be housed together. The prison itself was constructed to induce solitary confinement and utter loneliness in the inmates. Lockstep marching, striped uniforms, nighttime solitary confinement, and daytime labor were pillars of the model. Eight hundred small one-person cells were home at night when the inmates came in from working all day; this became a quick issue when on the first day of operations, the prison received over 1,400 inmates, resulting in immediate overcrowding. The prison housed children as well as adults, with one report of a pre-teen boy facing a lashing because he was laughing and whistling while he worked. The prison saw a couple of infamous names, such as James Earl Ray, the convicted murderer of Martin Luther King Jr. was also housed here until he died.

In 1863, the Union Army took hold of the prison and used it as a military penitentiary. Under Union occupation, the population of the prison nearly tripled, and conditions worsened even more. Every inmate was expected to pay a portion of their incarceration cost by performing excruciating physical labor. Inmates worked up to 16 hours per day for meager food rations.  They worked rain or shine, breaking rocks, working railroads, or plowing the nearby farms.

The Tennessee State Prison had its fair share of uprisings and strikes. In 1902, inmates became furious with the conditions they were subjected to and blew up the end of one wing on the prison, killing one inmate in the blast and allowing the escape of two others who were never captured. Later, a group of prisoners seized control of the segregated ‘whites only’ wing and held it for 18 hours before surrendering it back to the guards. In 1907 several inmates took control of a switch engine and drove it straight through the prison’s gates. 1938 was witness to a mass escape. Several severe fires occurred at the prison as well, including one that destroyed the main dining room with inmates trapped inside. A diary of an inmate was found, with one entry regarding the riots’ whatever meager privileges we still retain, we will now gamble away. Our backs are to the wall. We have no illusions that we will be rescued from afar. It is our fight: we shall accept the consequences together, whatever they may be.’

Abandoned since 1992 for inhumane conditions, the prison’s aura is an eerie one. The grounds are almost entirely silent, and the air is thick. The metal bars lining the windows are rusted out, the walls crumbling into dust. Few places on earth are more ominous than maximum-security prisons. Murderers, psychopaths, and monsters resided inside these walls. One can only imagine the intimidation, fear, and power struggles that boiled inside, festering within the rotting stone walls. The prison was scary enough when it was in operation, and even more so now that it’s fallen silent. When operations were shut down, ‘The Castle,’ a large wing of the prison, began to crumble slowly. Every speck of paint has bubbled up and peeled away from the walls, escaping them just like these inmates longed to. The floors, covered with layers of paint and poisonous dust, muffle the sounds of unexplained footsteps visitors hear when they enter the prison.

The prison was home to an electric chair and even gained notoriety for its trigger-happy use of the machine. Many of the prison’s inmates took their final breaths in the chair; others couldn’t handle the confinement and took their own lives, not realizing that their spirits may just become trapped again. Those who trespass and enter the now-dilapidated prison witness truly unsettling happenings. Inside, bars and chains are commonly heard clanging all about the cellblocks. Visitors report blood-curdling screams coming from the buildings’ furthest ends, only to find no other (living) souls when they go to investigate the noises. These screams are believed by many to be coming from the room with the electric chair, the residual energy repeating itself over and over again throughout time. Over 100 people were put to death here.

Disembodied voices, yells, and footsteps are commonplace. With all of the evil that once resided here, it’s no wonder why the spirits have been unable to transcend. The prison housed hundreds of inmates but also the anger of all of them. Aside from the criminals, the prison also housed many wrongfully convicted. During the time of the prison, segregation and racism ran rampant in the south, and Tennessee wasn’t immune to the hatred. Many African American men and women were brought to the prison because they angered their white neighbors, were wrongfully accused of rape and assault, and some were even electrocuted for the crimes they did not commit. A horrible fate, your humanity stripped away due to ignorance, your life now inside four walls.

In March of 2020, an EF-3 tornado swept through Tennessee, completely destroying the Tennessee State Prison in its path. As the 6th costliest tornado in United States History, the winds tore the roof and sides off the wings, exposing the rotten cellblocks. It’s almost as if nature was attempting to set free the prison’s trapped spirits, tearing the walls down that once confined them.

For even more spine-tingling paranormal visits, one of Tennessee’s most famous, Haunted Cade’s Cove, and the cursed blanket!